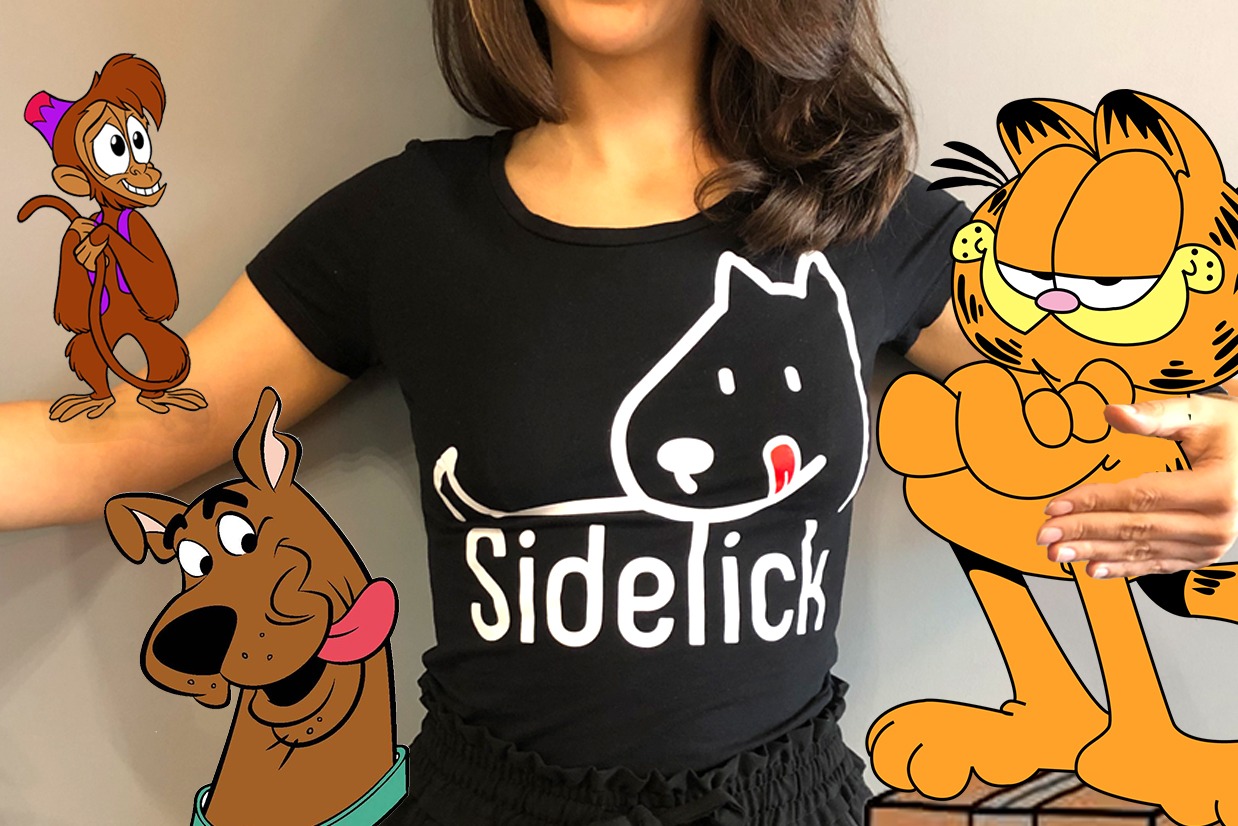 Our pet sitters will tell you that there’s nothing better than curling up on the sofa with their assigned pet and watching their favorite dog movie. We know that you love pets because at Sidelick, we do too – which is why we’ve compiled a list of our favorite fictional pets for you to revisit them and enjoy the perfect Saturday night in.

There’s nothing like a dog who solves mysteries. With his fun-loving nature and silliness, Scooby never fails to being a laugh to every viewer. His bond with his parent and shared love of food is something that will surely be understood by all our dog parents on Sidelick – there’s something about the love of a dog our pet sitters just can’t explain! Whether is running after horrendous monsters or exploring a haunted house, Scooby stands by Shaggy and the rest of the crew as their loyal friend.
Scooby is a male Great Dane, a breed known for their large size, but also for their underlying kindness and gentle attitude towards humans and other animals, often even called the ‘gentle giant’ of dog breeds. They’re great with kids and adults alike, but busy families should arrange pet daycare as they require attention to maintain their health and psyche . A better portrayal of their personality couldn’t be made than Scooby Doo!

Monkeys don’t always have a strong moral compass, but that doesn’t mean they can’t be lovable. Abu’s thieving fingers are just more reason to love him for his quick wit and cleverness, as he does everything in his power to help his pet parent. He’s funny, charming, and to be frank, we’re surprised Jasmine didn’t fall for him instead of Aladdin. His dexterity and nimble feet allow him to disappear and appear at just the right moments, just like your pets at home, and his love for his pet parent can only be understood by those who know the special bond of caring for a pet.

As portrayed in classic film Aladdin, Abu is a Capuchin monkey, whose breed primarily habitats the Central American and South American regions. This breed of monkey is considered wild, but can sometimes be trained as service animals to help people with disabilities. They are considered the most intelligent of monkeys from the New World region, and have the ability to develop close relationships with humans (such as Abu and Aladdin!).

3: Toto from The Wizard of Oz

Toto from The Wizard of Oz may just be one of the most-portrayed fictional animals in all of the media. Whether you know her from the 1939 movie, The Wizard of Oz, or from most recent appearances such as Disney’s 1985 rendition called Return to Oz, one can’t help but be amused by her curious and independent nature. Toto is highly intelligent and always on her toes, ready for any adventure led by her companion, Dorothy.

The original actress used for Toto in the 1939 film was Terry, a true-breed Cairn Terrier. Our pet sitters and their know-how say that this intelligent and quick-to-learn dog can be taught almost any trick in the book – it is an independent dog who loves interacting with kids, and can be a wonderful addition to any family.

All readers and watchers must have been jealous of Harry when he received Hedwig, the snowy owl, as his 11th Birthday Gift from Hagrid. Not only was Hedwig used a messenger owl as was customary in the world of Hogwarts, but she remained Harry’s close companion until her death. Hedwig wasn’t just any old owl; she had a sense of principle and dignity, turning her back to Harry whenever she disapproved of something he did. Who wouldn’t want a beautiful snowy owl as their moral compass and caring friend?

Hedwig is a classic Snowy Owl of the species Bubo scandiacus, who are named ‘snowy’ due to their large inhabitation of the Arctic regions in North America and Europe. As the wild animals they are, they rely on their sharp eyesight and hearing to catch their prey and their beauty never fails to captivate.

5: Spike from Tom and Jerry

Spike may be the arch-enemy of our protagonist Tom, but his real nature is one of friendliness and amiability. His chase scenes are some of the most memorable from Tom and Jerry, usually caused by one of Tom and Jerry’s little adventures gone haywire. He takes on his sternest side when defending his son, Tyke and protecting him from the dangers of the world.

Spike is an American Bulldog, a breed that is commonly known as the iconic breed of America. These dogs are social, friendly and deeply attached to their parents, yet this attachment can make them wary of strangers and possessive of their family, hence making them the perfect watchdog in any household. Our pet sitters tell us the American Bulldog’s cleverness allows them to be easily trained and playful with people of all ages.

Who better to end out list than most iconic lazy, slightly overweight, no-nonsense house-cat? We’ve all seen the hilarious comic strips in the daily newspaper, whether focusing on Garfield’s innate hatred for exercise (comment if you can relate!) or his deep love for lasagna, he never fails to bring a smile to our pet sitters’ faces through his smug and sarcastic humor.

Garfield is an orange tabby cat, domestic cat variety distinguished by their patternized coat, often covered in dots, stripes of zig-zags. These cats can be of many different breeds, such as the American Bobtail, British Shorthair, and Abyssinian cat species. Although not deriving from one breed, tabbies are often playful and loving, and always undeniably cute!